Budgets, as the saying goes, reflect our values. Take a closer look at where the money goes – or doesn’t – and you can readily see our nation’s priorities.

This is perhaps never truer than during an economic downturn. At FPWA, we’ve examined the trends in federal spending for human services using our online Federal Funds Tracker tool. We know that since the Great Recession ten years ago, the federal government’s austere budgets have left human service programs in New York City deeply underfunded. Such policy choices have disproportionately harmed Black New Yorkers and other communities of color. Now, a decade later, the coronavirus pandemic is dealing another uneven blow to these communities.

Our Tracker tells us where the money didn’t go. But what do we learn when we look at where it did go? What does the data reveal about our priorities and something more – our systemic biases? 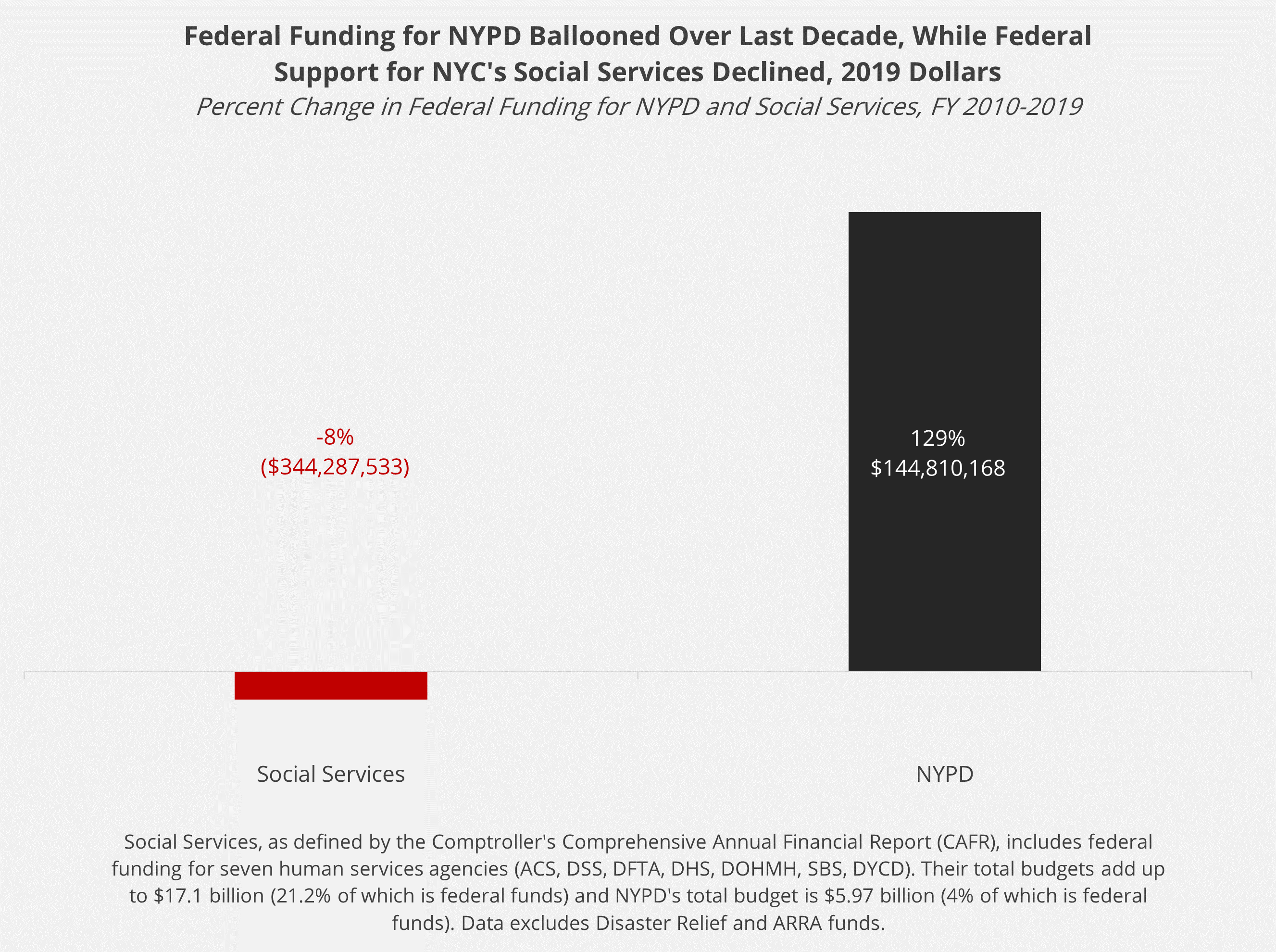 Driving this growth in federal funding for the NYPD is the ‘Urban Area Security Initiatives’ (UASI) – a formula grant that is intended to “protect against terrorism in high-threat, high-density urban areas”, but that some civil liberty, humanitarian, and religious organizations have identified as being central to the “acceleration of police militarization and lack of accountability.”


Nationally, $605 million was appropriated for UASI in federal fiscal year (FFY) 2020 – an increase of $25 million since FFY 2019, or $9.4 billion since the program was signed into law in the 2003 Omnibus Appropriations Act.

New York City has received a quarter ($2.3 billion) of all UASI funding. In FY 2019, the NYPD received more than $117 million for UASI, representing approximately half of the Department’s federal funding. The vast majority of this funding supports NYPD’s ‘security/counter-terrorism’ program, while Housing and Preservation Development (HPD) and Department of Health and Mental Hygiene (DOHMH) receive a small slice each.

Subject matter experts in policing and counterterrorism and those with a better grasp of NYPD’s opaque budget will better understand how NYPD’s UASI funding is spent, the efficacy of the nearly two-decade-old program, and the extent to which other programs such as the Department of Defense’s 1033 program have militarized the NYPD. We do know, however, that the “nexus to terrorism” funding requirement in the UASI program has enabled police departments across the nation to acquire highly militarized weapons such as body armor, bayonets, automatic rifles, grenade launchers, armored vehicles, and surveillance drones.

These cast-off weapons from the Pentagon are intended to support counterterrorism efforts, but the resulting militarization of police forces is also used in the everyday policing of Black, Latino, and poor communities, the illegal surveillance of Muslim communities, and the escalation of police violence against protestors. In fact, the UASI program came under scrutiny following the weeks-long standoff between anti-police brutality protestors and heavily armed police forces in Ferguson, MO.

FPWA’s online Federal Funds Tracker tool visualizes trends in federal dollars for human services in NYC, but it also allows users to download trend data on federal grants that support all categories of spending. As policing in America is more closely examined, especially as experienced by Black Americans, these findings gives credence to concerns expressed by protesters, advocates, and policymakers who wish to see the budgets of police departments more closely scrutinized, and more dollars reallocated towards human services such as education, housing, mental health, and other social services.

Black Americans have been disproportionately harmed by each of the last decade’s crises and disinvestments in programs that improve people’s lives, while simultaneously confronting systemic racism that is present – and well-funded – today, such as militarized and discriminatory policing.

As Congress begins preparing next fiscal year’s budget, it is encouraging to see bipartisan legislation that acknowledges the federal government’s role in the militarization of local police departments, but closer scrutiny will be required to truly address the full scope of budget tradeoffs that exacerbate racial injustices.