A Tale of Two Federal Budgets, and a Path Forward

By: Gaurav Gupta-Casale and Derek Thomas

However, this agreement is merely an outline – the Senate will need to fill in the line-by-line details of agency budgets after they return from recess in September and prior to the beginning of the next fiscal year, which begins on October 1st. In so doing, the Senate should follow the priorities established by the recently passed House appropriations bills.

President Trump’s spending plan kicked off the federal budget process in March, and the House made significant progress over the last several months by passing 10 of the 12 appropriations bills (the legislation needed to appropriate federal dollars). While the president’s budget carries little weight in Congress, it’s nonetheless worthwhile to compare the priorities that have been set forth thus far in the respective spending bills.

We analyzed the impact of the two proposals on the federal funding that supports the following New York City human-services agencies: Administration for Children’s Services (ACS), Department for the Aging (DFTA), Department for Youth and Community Development (DYCD), and the Department of Social Services (DSS). In partnership with nonprofit human service providers, these agencies support the needs of children and older adults and deliver effective poverty fighting tools and other critical services. Collectively, the 37 federal grants these agencies received in FY 2018 represented 78 percent of all social services funding to the City.

While the effects differ by agency, Trump’s budget proposal would cut total funding to these agencies by 18 percent, while the House spending plan would boost their federal support by 8 percent. 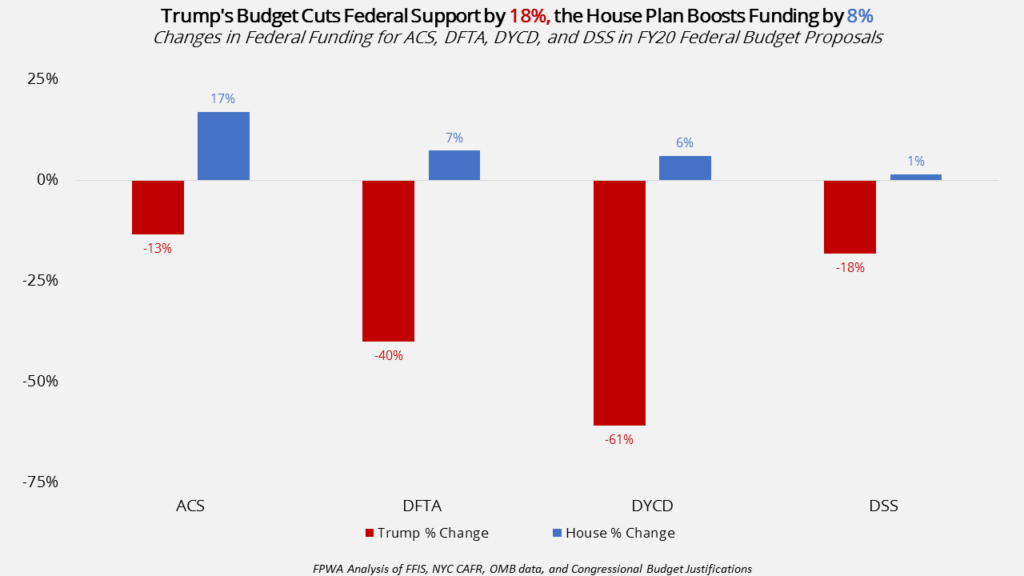 Readers can visit our Tableau page to compare how most of the 37 grants fared in each of the proposals, but the following provides a sample of a few federal grants that support New York City’s human-services budget and sector.

In contrast, the House would increase LIHEAP by 4 percent, CSBG by 5 percent, CDBG by 9 percent, SSBG by 0.3 percent, and HOME by 40 percent. Collectively, the House plan would raise total discretionary funding $51 billion above the level enacted for 2019 and $176 billion above the Budget Control Act (BCA) caps. This increase would begin to restore lost funding for programs for children, job training, health care, and medical research, and increase funding for the Census Bureau to conduct the 2020 Decennial Census.

The Federal Funds Tracker features stories about how these federal grants, and many others, positively impact the communities our nonprofit human-service providing members serve. Further disinvestment in federal programs will undermine the critical services that these organizations provide, made possible, in part, by federal funding.

Individuals and organizations in New York City can take action to urge Congress to reverse course on a decade of austerity that has resulted in a $320 million decline in federal human-services funding in New York City since FY 2010.

Individuals: Ensure your voice is heard by visiting our Take Action page to send a letter to your member of Congress asking them to follow the priorities established in the House spending plan.

Organizations in New York City (human service providers, faith organizations, and policy experts): Sign a letter on behalf of the Federal Tax and Budget Response Team addressed to all NYC-area members of Congress by August 12th.