A Rising Tide Does Not Lift All Boats

Even as poverty declined, growth in median household income stagnated and inequality is the highest on record. Following a strong increase of 5.1 percent in 2015, growth in median incomes slowed in subsequent years before stalling out last year. Meanwhile, high-income earners continue to capture a disproportionate share of the nation’s economic growth. The rising tide that is the longest economic expansion on record is not lifting all boats.

In places like New York City, robust economic growth driven by a strong labor market and wage growth alongside progressive policies designed to bring low- to middle-income households aboard – such as increases in the minimum wage and universal pre-k – have led to reductions in poverty and increases in median household incomes. However, enormous structural inequities exist, such as gaps in median income by race and ethnicity, and income inequality in the City did not budge, and is more uneven than New York State overall, where inequality is greater than every other U.S. state.

To truly lift all boats, a great deal of work remains both locally and nationally.

Poverty in New York City declined from 18 percent in 2017 to 17.3 percent in 2018. That’s nearly 2 percentage points below the poverty rate in 2006, prior to the Great Recession.1 While the City as a whole experienced a reduction in poverty, no borough by itself saw a rate decline and Staten Island stands out as the only borough with poverty rates above pre-recession levels. 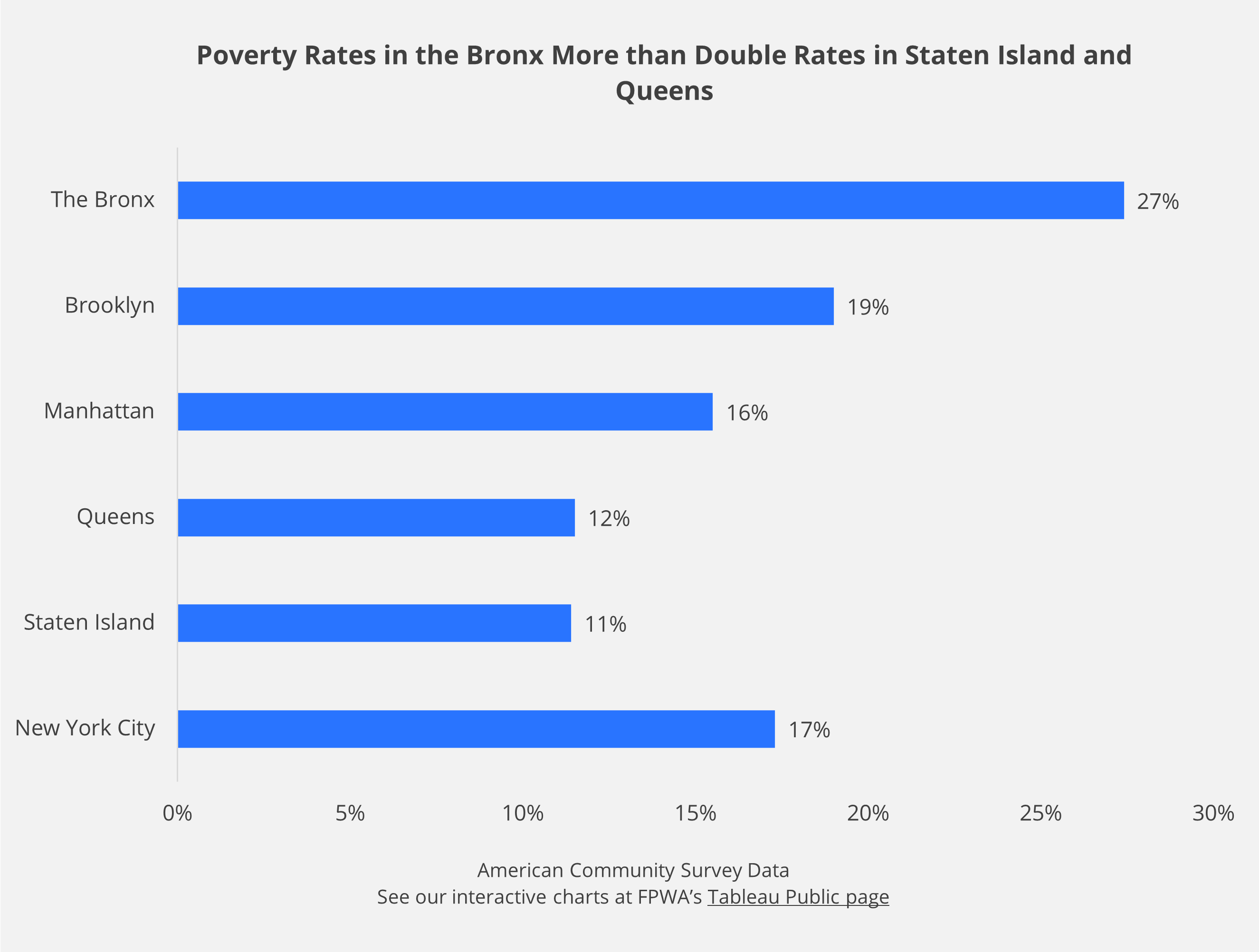 To be sure, the national poverty rate is itself a low bar, falling well short of measuring the income required for a basic standard of living. According to the OECD – who benchmarks poverty at half the median income for 39 nations – the U.S. had the fourth highest poverty rate in 2018 and the seventh highest child poverty rate.2

Beyond the Official Definition of Poverty – Basic Living Standards

Created more than a half-century ago, the Federal Poverty Level (FPL), which sets a threshold for poverty for a single adult at $12,490 a year, is a woefully inadequate measure of well-being. Instead, in a high-cost city such as New York, three times the federal poverty level (300 percent FPL or $37,470 annually) is a more realistic and quantifiably accurate3 threshold for measuring basic living standards, such as safe and secure housing, a quality education from cradle to post-secondary, access to nutritious food, quality healthcare, emergency savings, and the changing necessities required to participate in society.

Applying this more sensible yardstick, the data reveal that the share of individuals living above 300 percent FPL increased from under half (49.2 percent) in 2017 to more than half (50.7 percent) in 2018. (This shift appears to be driven by population declines, rather than individuals climbing the economic ladder.4) 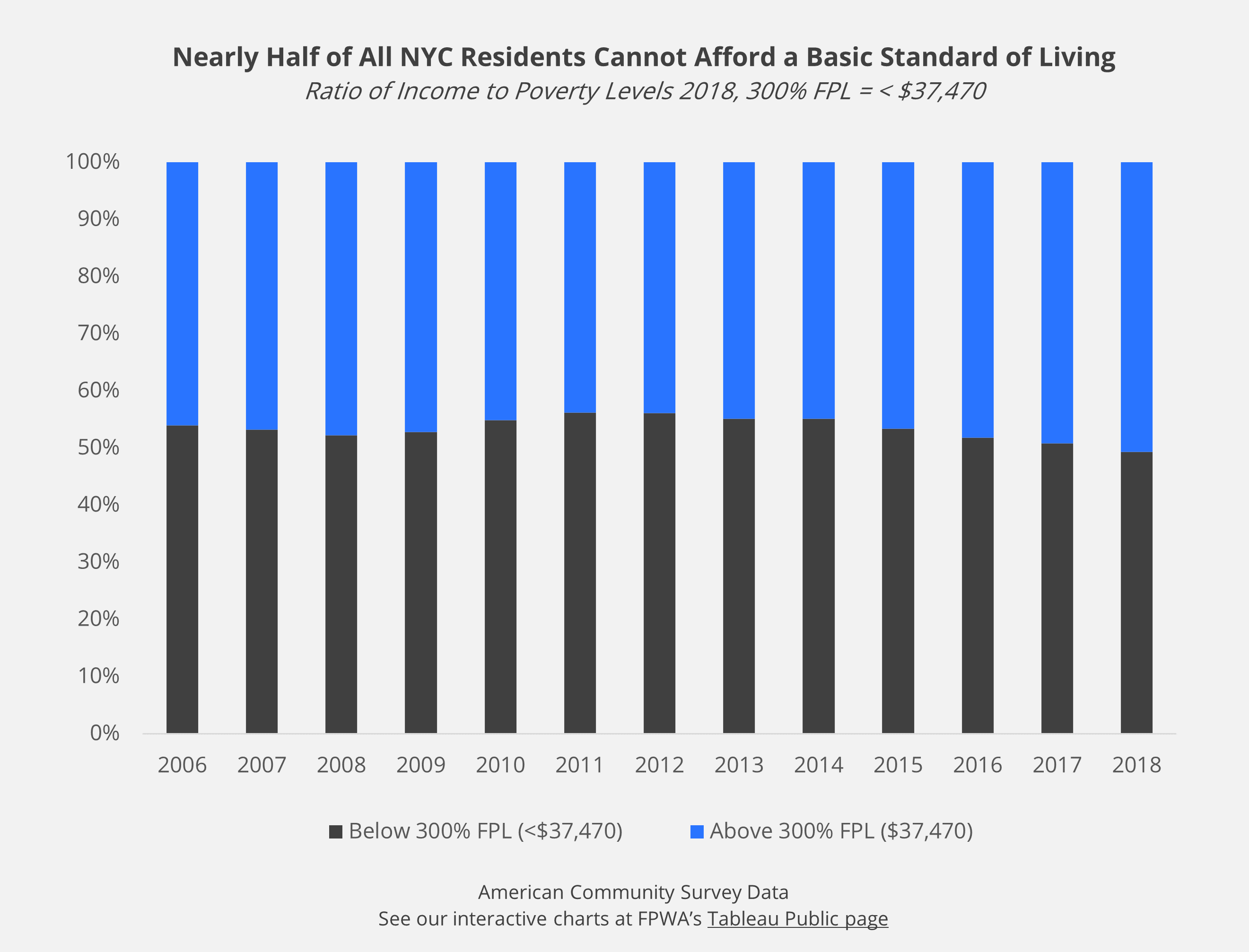 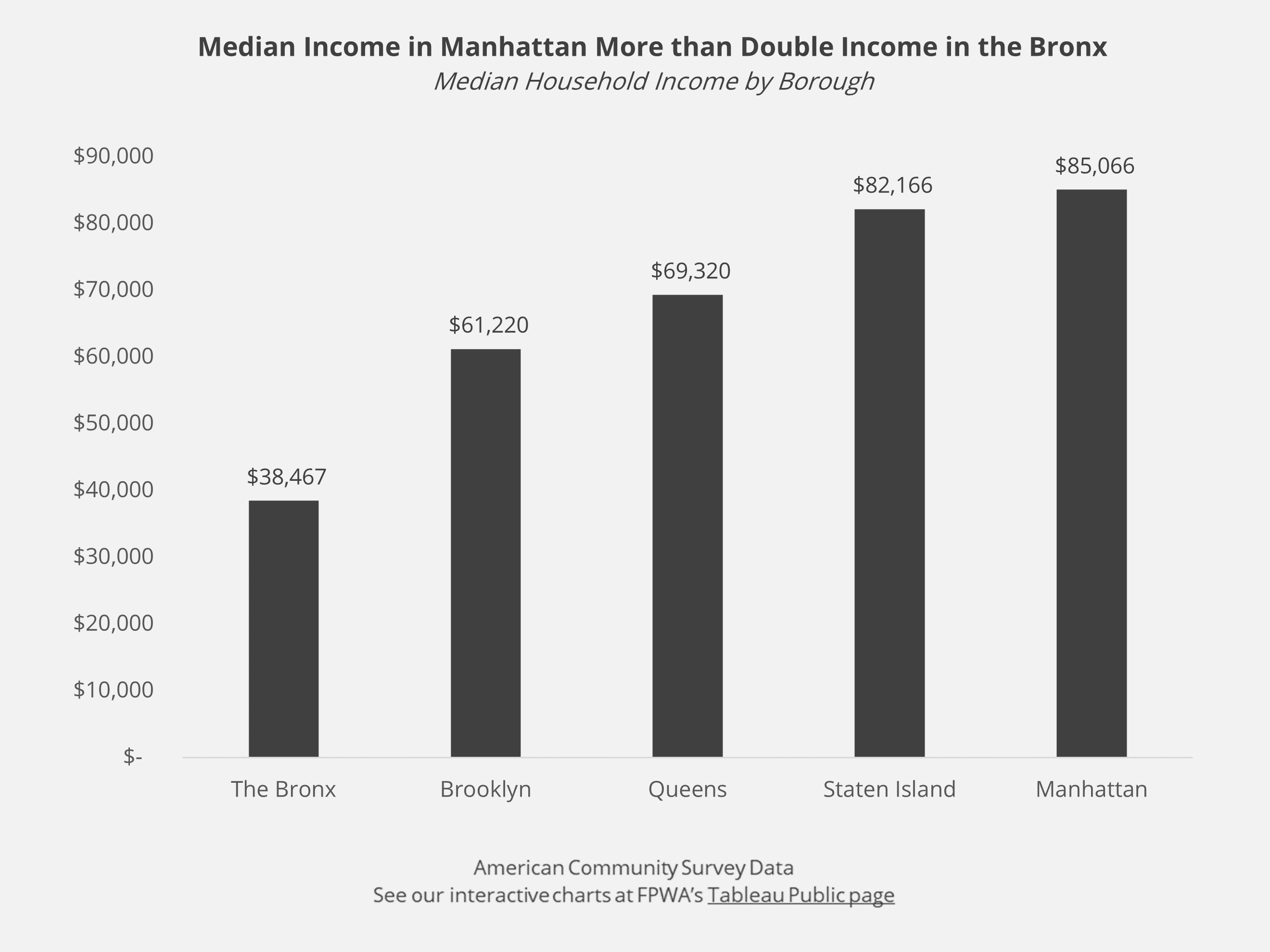 Inequality did not budge in New York City. Across boroughs, only in Staten Island saw inequality reduced.

A report from 2018 found that New York State was among five U.S. states where the top one percent captured a larger share of income than they did in 1928 at the height of the Gilded Age. New York State also has the dubious distinction of having the largest income gap among all states — in 2015 the top 1 percent earned 44 times the income of the bottom 99 percent on average. As the report notes, “this reflects in part the relative concentration of the financial sector in the greater New York City metropolitan area,” where the top one percent earned 39.4 times more than the bottom 99 percent.

Beyond the Official Definition of Poverty – Basic Living Standards

Nationally: A dramatic course correction is required in Washington D.C. President Trump’s budget proposals , regulatory and rule-making attacks on food assistance and support for immigrants, and trillions of dollars in deficit-financed tax giveaways to the powerful and profitable corporations – as if they aren’t enough – follow a full decade of federal budget austerity.

We at FPWA are working alongside our city, state, and national allies and the City’s congressional delegation to:

1) The EITC targets workers in low-paid occupations and who have lower wages within a given occupation – workers who are more likely to be women of color, and

2) The Act would make the CTC, like the EITC, fully refundable – that is, if filing the credit brings an individual’s tax liability below zero, the IRS would send them a check for the difference. Because the current structure of the refundability feature doesn’t extend fully to low-income workers who are more likely to be women of color, they would disproportionately benefit from the expansion of a fully refundable credit.

Locally: New York City has been a bellwether for progressive public policy in the U.S., reducing hardship and boosting incomes for low- to middle-income households, and the State recently made strides in passing landmark rent reforms. However, much remains to be done to combat the wage stagnation we have seen in low-wage jobs this past decade and help close median income gaps.

We at FPWA are working with Strong Nonprofits for a Better New York to advocate for increased State investment in the human services workforce, which is about 20% of New York’s workforce and is largely employed under State contracts with nonprofit providers. This workforce is 81 percent women, 46% people of color, and among the lowest-paid in the State. There is no hope of narrowing median income gaps if these workers cannot, at bare minimum, earn a salary that can keep up with the increasing cost of living. Yet, these workers have not seen a salary increase in nearly a decade. Therefore, we seek the reinstatement of the statutory human services workforce cost-of-living adjustment for the State’s human services contracts.

2 The OECD defines poverty as “the ratio of the number of people (in a given age group) whose income falls below the poverty line; taken as half the median household income of the total population.”